A 3D view inside environmental flows

3D photography dates back to the 19th century; at the Musee Mecanique on Pier 45, you can view 3D photos of the San Francisco in 1906–after the earthquake and fire. The basic principles haven’t changed at all, but 21st century technology allows 3D imaging to be deployed in new ways.

Variano’s camera is designed to penetrate into the optically-obscured region of suspension flows in the environment. This includes oil droplets in an oil spill, “blooms” of phytoplankton, and suspended sediment in estuaries. By tracking the motion of individual particles, they can predict the rate at which the dense suspensions will be diluted by the ambient stirring.

So far, Variano has used the camera to better understand nutrient budgets in Sacramento-San Joaquin Delta wetlands and phytoplankton in the upper ocean. This coming year, the team will be focusing on sediment transport in the San Francisco Bay, as well as laboratory models of the Deepwater Horizon oil spill. Variano emphasizes that a key advantage of their design is that the camera is tough enough to deploy in rough environments, and inexpensive enough to deploy where there is a significant chance of loss.

Among them were masters student Rachel Allen, doctoral student Ian Tse (who built the 3D camera) and doctoral student Cristina Poindexter.  Poindexter’s research is on the Delta wetlands, which represent a major opportunity for civil and environmental engineers.

Delta wetlands were converted to farmland in the nineteenth century, and the result of continuous farming has been soil subsidence. This subsidence presents a significant flood risk, which presents major ancillary risks to critical water, power, and transportation infrastructure.

One proposed solution looks to alter the farming operations that have caused the subsidence.  Conventional agriculture can be replaced with crops that will reduce, or even reverse, subsidence.  The California Department of Water Resources and United States Geological Survey (USGS) manage a variety of experimental wetlands (including rice fields) to test the potential for large-scale subsidence reversal.

Variano’s team is working in one of these experimental wetlands. Their goal is to understand the chemistry and physics of how the air, water, soil, and plants are linked. Of particular interest to the storm-chasing students are the physics by which wind stirs the wetland. In other water bodies, such as lakes and rivers, the wind will stir the water directly, kicking up waves and associated turbulent flow. In wetlands, however, wind has a powerful indirect effect: it can make the wetland plants sway, which in turn stirs the water.

The storm-chasing students caught this all on video–3D video–and can now discern how much stirring is caused by water waves, and how much is caused by waving reeds.This knowledge is important for designing and managing large-scale wetlands like those proposed in the Delta and elsewhere.

“Stirring controls the rate of chemical reactions, and thus influences how much carbon is taken from the atmosphere and sequestered in the soil,” Variano explains. "By designing wetlands that receive the optimal amount of stirring by environmental forces, environmental engineers can exert at least some control over the chemical reactions occurring therein. In the Delta, this means maximizing the rate of subsidence reversal, as well as minimizing any negative side-effects such as methane emissions."

The team looks forward to presenting these results to the academic community, plus interested parties working in Delta management. Plans for the future include a new project deploying the camera to understand sediment transport in San Francisco Bay, and a new job for graduate student Cristina Poindexter who will earn her PhD this spring. 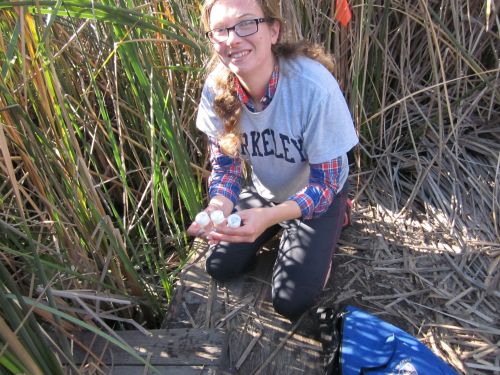