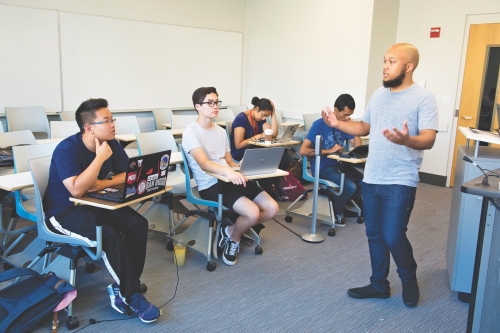 PhD candidate Millard McElwee is featured in Washington Monthly's September/October issue, which highlights his research and reasons for pursuing engineering. McElwee first realized he wanted to study engineering during the aftermath of Hurricane Katrina in 2005, which left New Orleans largely destroyed. Not only did he want to understand why the city's levees had failed so badly, but why the most vulnerable neighborhoods were the greatest impacted. "Natural disasters don't discriminate," said McElwee. "But we do know there are disparities in the responses and reaction times."

After the storm, McElwee dedicated himself to his classes and attended MIT's Minority Introduction to Engineering and Science program, a selective academic camp for teenagers from underrepresented communities. He then went on to study civil engineering at Carnegie Mellon University, before coming to UC Berkeley where he quantifies how natural disasters impact communities of color. In 2019, McElwee built a mathematical model that predicts how floods impact travel times in New Orleans, the first to explore the reasons these times go up for minorities.

McElwee's work reflects a greater trend among Black researchers in STEM. According to experts, scientists of color are more likely than their white colleagues to study problems with a clear relationship to issues of equity. At the same time, the paucity of Black students in technical fields reflects the numerous structural barriers that these students face, including the small percentage of Black majors and faculty in STEM. According to Ebony McGee, professor of education at Vanderbilt University, Black students are leaving the sciences "not because they cannot do the work but because they cannot see themselves in traditional STEM fields."

After earning his PhD, McElwee wants to pursue academia to serve his community and bring more people like him into engineering. It is also a call to action to STEM departments to center themes of social justice in their curricula, to create a corps of engineers and scientists capable of addressing challenges that disproportionately impact vulnerable communities and ultimately everyone, like climate change and access to health care.