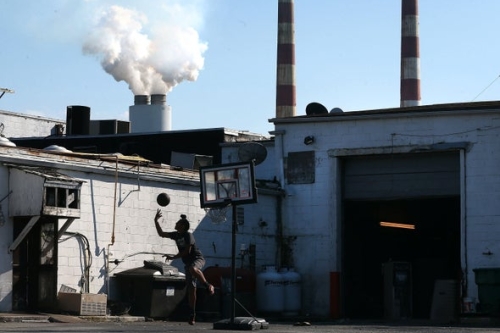 Research has shown that people of color are disproportionately exposed to hazardous air in the United States. A new study adds to this body of research, finding that exposure disparities among whites and people of color are driven by nearly all emission sources, not just a few as previously examined.

The study was led by University of Illinois Urbana Champaign professor Christopher Tessum and is published in Science Advances. Josh Apte, professor in UC Berkeley's department of civil and environmental engineering and the School of Public Health, is a co-author.

Using an air quality model, the researchers analyzed Environmental Protection Agency data from more than 5,000 emission source types that contribute to fine particle air pollution, such as coal electric utilities and road dust. They then combined the spatial air pollution pattern predicted by their air quality model with residential population counts from the U.S. Census Bureau to identify differences in exposure associated with race-ethnicity and income.

The study finds that air pollution disparities arise from a more systemic set of causes than previously understood. “We were struck by how these systemic disparities exist for people of color not only in certain neighborhoods but at every spatial scale in the U.S.,” says Apte. “The problem exists within urban and rural areas, many distinct U.S. regions, and for people living within almost all American cities.”

“Some assume that when there is a systematic racial-ethnic disparity, such as the one we see here, that the underlying cause is a difference in income,” Tessum adds. “Because the data shows that the disparity cross-cuts all income levels, our study reinforces previous findings that race, rather than income, is what truly drives air pollution-exposure disparities.”

The researchers hope their findings will create opportunities to address long standing inequities in exposure to air pollution.