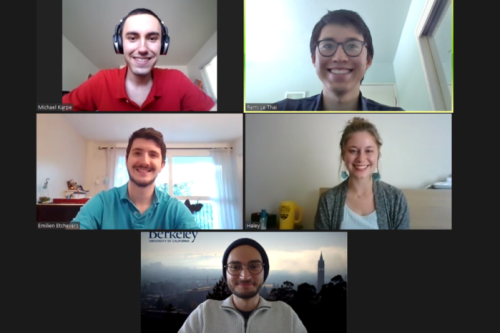 CEE graduate student Kieran Janin, along with four teammates from Berkeley Engineering, won the 2020 Google Cloud & NCAA® March Madness Analytics Competition hosted through Kaggle. Though this year's March Madness tournaments were cancelled due to the COVID-19 pandemic, Janin's team used machine learning to analyze data from previous seasons in order to uncover the "madness" behind the famous men’s and women’s college basketball tournaments.

After carefully evaluating the available data, the team identified "entertainment value" and "excitement" as key factors to analyze the madness of the games. In order to quantify the entertainment value of the games, it developed metrics on leaderboard switches, suspense (the last moment the winning team took the lead), and point spread. To measure the excitement, it examined relevant Twitter data to conduct a sentiment analysis of tweets occurring during the tournament.

Participating in the competition highlighted to the team the importance of data presentation and analysis. While it was drawn to impressive data visualizations, the team often realized that such analyses did not have much substance beneath the surface. It concluded that we can often find what we are looking for in data, so it is fundamental to consider the context in which the analysis is occurring, and what story to tell.