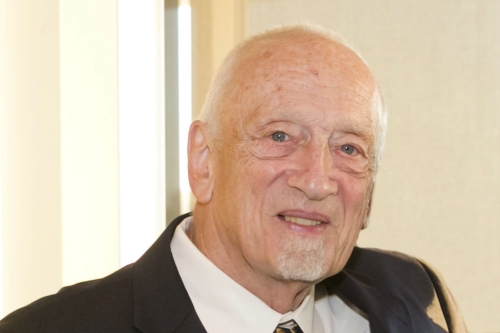 Professor Emeritus David Jenkins passed away on March 6, 2021. He was 85 years old.

Professor Jenkins received his PhD in Public Health from King's College University (Durham) in 1960. He joined UC Berkeley in 1964 as an Assistant Professor, rising through the ranks to full professorship in 1975. He retired in 1999, and remained deeply committed to Campus and the Department throughout his career.

Professor Jenkins's research focused on the chemistry and microbiology of wastewater, including contributions to wastewater treatment science and technology that brought him worldwide recognition.

On Campus, he was recognized for his influential research, superb teaching and excellent service, winning the Berkeley Citation in 1999. Highlights include chairing the International Education Committee, where he played a prominent leadership role in the education abroad program during the late 1980s and early 1990s, and serving as the Vice Chair for Graduate Affairs.

Professor Jenkins's achievements were also widely recognized beyond UC Berkeley. He was elected to the National Academy of Engineering in 2001, won the 1995 Gordon Maskew Fair Medal for outstanding contributions to environmental engineering education, and received the 1995 Water Pollution Control Federation's Outstanding Publication Award for an archival journal publication that has stood the test of time.

Professor Jenkins was not only an accomplished scholar, but a vital link between the Department and our emeriti and alumni communities. Until his last days, he maintained strong connections to colleagues, documenting their stories and contributions to the engineering field. With immense sadness and admiration, we reflect on Professor Jenkins's life and all that he gave to his family, friends and beloved UC Berkeley community.