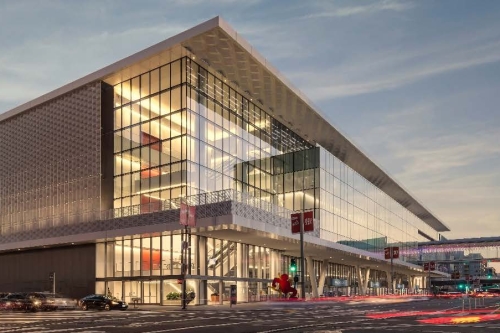 Join us for a special seminar sponsored by our SEMM program and the PEER Center, "Moscone Convention Center Expansion and Renovation, SF."

The expansion and renovation of the Moscone Convention Center in San Francisco, completed in 2019, was commissioned by the City and County of San Francisco to keep the facility, one of the top financial engines of the city, competitive with other rival venues. Its civic presence along east-west running Howard Street is a composition of transparent and translucent materials, bringing natural light to interior public spaces and revealing the activity within while also energizing the street and the surrounding public realm.

The renovation and expansion of the convention center has enabled San Francisco to maintain its place as one of the premier conference destinations in the US. The structural design team consisted of SOM-SF, Tipping Structural Engineers-Berkeley, and SOHA Engineers-SF.

Mark Sarkisian PE, SE, LEED BD+C, Partner of Seismic and Structural Engineering b, has developed innovative engineering solutions for over 100 major building projects around the world including some of the tallest and most complex. Mark holds nine U.S. Patents and five International Patents for high-performance seismic structural mechanisms designed to protect buildings in areas of high seismicity and for seismic and environmentally responsible structural systems. He is the author of “Designing Tall Buildings – Structure as Architecture,” and teaches at UC Berkeley, California College of the Arts, Stanford University, Cal Poly, Northeastern University, NC State University, and the Pratt Institute. He has a BS-CE Degree from the University of Connecticut and is a Fellow of its Academy of Distinguished Engineers, an MS-SE Degree from Lehigh University, and an Honorary Doctorate Degree from Clarkson University. Mark was inducted into the National Academy of Engineering in 2021.

Leo Panian PE, SE is a Principal at Tipping Structural Engineers, which he joined in 1997 after graduating from the Master’s program in SEMM at U.C. Berkeley. He practices from the intersection of seismic engineering, advanced analysis, and design technology, to deliver costefficient, high-performance projects for his clients. Leo’s career has focused on creating practicable design solutions founded on an expert understanding of structural performance. Leo has led and managed many of Tipping’s ambitious projects, garnering regional and national recognition for innovation and engineering excellence in seismic design.

Gerard Madden PE, SE joined SOHA Engineers in 2007. He received his Master’s degree in Structural Engineering from San Jose State University and has extensive experience in the analysis and design of new and existing steel, concrete, and wood buildings. As Senior Project Manager, his responsibilities include all phases of design as well as construction administration. Mr. Madden’s past project experience includes healthcare facilities, educational facilities, laboratories, office buildings, civic facilities, state and federal projects, and the restoration and upgrade of historic structures. Mr. Madden often serves as SOHA Engineers’ primary day-to-day contact person with the design team on all technical and contractual matters. His critical role extends to supervision and direction of SOHA’s project staff, contract management, scheduling, cost control, quality assurance and coordination with the design team.

Chris Horiuchi SE, LEED AP is an Associate of Structural Engineering in the San Francisco office of Skidmore, Owings & Merrill LLP (SOM). A graduate of the Master’s program in SEMM at U.C. Berkeley, Chris joined SOM in 2014. His work has included the Moscone Center Expansion, the Sea-Tac Airport International Arrivals Facility, and the expansion of the LA County Museum of Art. Chris is active in multiple research efforts within SOM developing new systems and techniques to address seismic resilience and reduce carbon footprint of the firm’s projects.