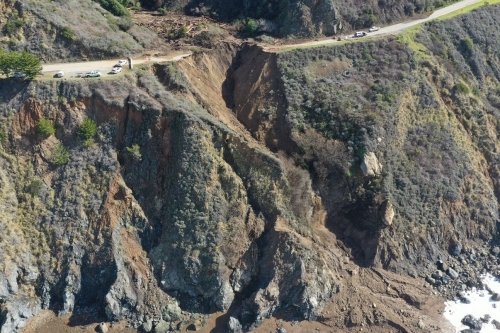 On January 28, 2021, a large chunk of Highway 1 at Rat Creek fell into the ocean below, leaving a gaping hole along the popular roadway. In collaboration with CalTrans, a team of UC Berkeley Geosystems faculty, alumni and students deployed shortly after the collapse, collecting unique UAV, LiDAR and oil data to characterize the failure. Although the investigation is ongoing, the team found that the road embankment was eroded after it became overwhelmed by a debris flow that was triggered during heavy rainfall. A debris/tree dam that breached during the storm appears to have contributed to the failure.

The team, known as the ASCE Geo-Institute Technical Committee of Embankments, Dams and Slopes, is co-led by Professor Dimitrios Zekkos, UCB alumnus Professor Tim Stark (UIUC), and UCB alumnus and President of Cal Engineering and Geology Mr. Phil Gregory. Professor Nick Sitar, who studies debris flows, is also a team member, along with PhD students Jhih-Rou Huang and Parker Blunts. Engineers, geologists and geospatial data analysts from Cal Engineering and Geology, WSP (alumnus Dr. Kenneth Johnson), GeoTerra and ElxisGroup are also part of the group. With CalTrans, the team is preparing an ASCE Geotechnical Special Publication on its findings.

Repairs of the highway began March 1, and CalTrans recently announced that it will officially reopen on April 23, just 85 days after the road washed out.

Click here for more photos from the reconnaissance mission.