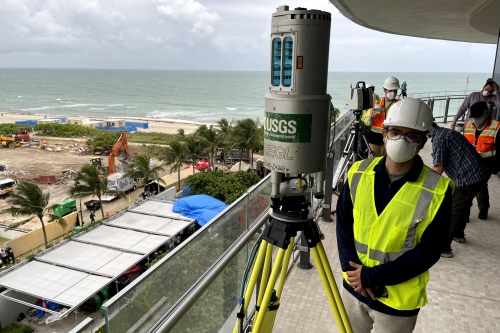 Following the June 24th partial collapse of the Champlain Towers South in Surfside, Florida, the U.S. Department of Commerce’s National Institute of Standards and Technology (NIST) has been conducting a full investigation into what caused the tragic event. As part of the investigation, Professor Rob Kayen and PhD student Parker Blunts traveled to the site this summer to collect Lidar data and plan Structure-from-Motion imagery.

At Surfside, Kayen and Blunts were principally responsible for gathering Lidar data — a system that sends out rapid pulses of light and records the reflections to create a three-dimensional map. The data is being used to record the locations of building materials or elements of potential interest and changes to the site as debris is removed.

Kayen trained NIST staff in Lidar data collection and processing, which investigators used to take daily high- and low-resolution scans of the site from balconies on adjacent buildings to the north and south of the Champlain Towers South site. Time-lapse cameras also recorded the rapidly changing scene. Drones carrying cameras flew over the site to help with the geotagging of evidence and captured changes, providing information on the exact location of evidence before it was removed.

In the coming months, Kayen will work with NIST to process and register over one hundred separate epoch data sets collected over the last month to reconstruct the location of building elements removed from the site as part of the technical investigation.

There are several million high-rise condominium units in Florida alone, many of them near the ocean and aging. While the NIST investigation is intended to identify the cause of the Champlain Towers South collapse, it could also uncover potential issues for other similar buildings nearby and throughout the nation.