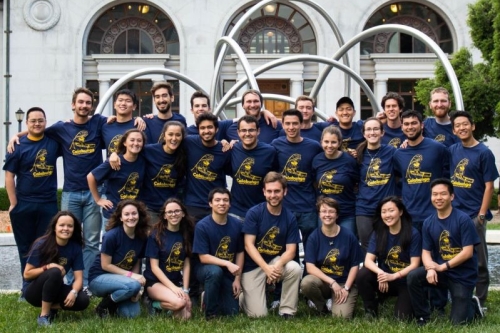 Out of the 43 national and international student teams that had advanced to Nationals, Berkeley placed 4th overall, placing 2nd in both the construction speed and construction economy categories.

Fourth place is not recognized with an award but the Bridge team returned home knowing they had earned the respect of the other teams. Moreover, team members were happy with the construction segment of the competition as well as how their building team performed in the high-pressure competition environment.

Sizing up the competition

Steel Bridge competitions begin with the Aesthetics display. Teams set up their bridges and posters and walk around checking out each other's entries. The Aesthetics display is particularly interesting for new team members because for the first time they see how other teams have tackled the rules.

It is also the first time everyone sees who the big contenders will be.

Aesthetics gives teams a chance to socialize without competition day pressure. Even though the top teams can be secretive about their design and fabrication methods, everyone was willing to share some of their ideas and make comparisons with other teams' creations.

When competition day arrived on Saturday, Bridge felt confident from what they had seen during Aesthetics, and yet nervous about how their bridge, and the team, would perform.

It turns out there was no need for worry; Berkeley's construction team performed at the top of their game, completing their bridge in 4:15 minutes. This was their fastest time ever, and one of the fastest times Berkeley has ever posted at a national competition.

A strong finish for a strong year

Each member of the 30-person team put in long hours throughout the year.

In the fall, the design team came up with the best bridge they could offer.

The fabrication team tweaked the structure from last year, completely overhauling how the spring fabrication process would be organized. Not only did Calabunga look top notch, but it was fabricated entirely by students—not sent out to professionals as is the practice with some schools.

And finally the construction team put in the hours that earned them one of their biggest successes in recent years: an incredible build time and the awards to match.

In two months, the 2018 rules will be released and this entire process will begin all over again! All the late-night discussions throughout Nationals, the pages and pages of notes, the ideas to try, and the lessons learned are already part of the excitement around designing next year's bridge.

And a new generation is taking over the reigns. Over the summer the team’s leadership will make the necessary preparations so that the team can hit the ground running in August.

What’s Berkeley’s secret? Women in all aspects of the team (photo below).

And the belief? Next year’s team can go even further.

Bridge thanks everyone who helped them this past year. Students put in endless hours to make this bridge, but none of it would be possible without the support of many, many people.

And the team is grateful to the CEE Department, the ASCE Joint Fundraising Committee, Boeing, Computers and Structures, Inc., Solidworks, Albany Steel, MSE Industrial Supply Co., and Aircraft Spruce and Specialty Co., for their loyal and generous support of the team.