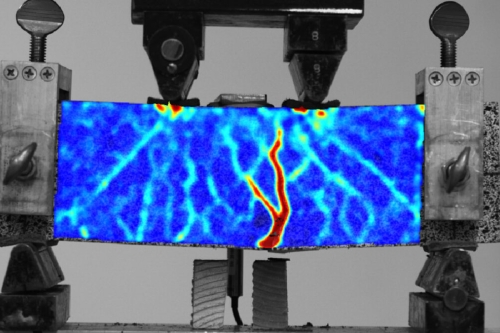 Professor Claudia Ostertag is a co-author of a study recently published in Materials and Design, reporting a new technique to reinforce concrete, one of the world's most consumed resources. Concrete is cheap, abundant and strong under compression, but notoriously weak under tension. To address concrete's brittleness, Ostertag's team developed a way to reinforce concrete with a polymer lattice, which could both improve concrete's ductility and reduce the material's carbon emissions.

The Berkeley researchers used a 3D printer to construct octet lattices from polymer, then filled them with ultra-high performance concrete (UHPC). The result is a material that is four times stronger than conventional concrete. This finding could increase the appeal of concrete, as the lattice reinforcement stops cracking before it becomes too large. In addition, the technique demonstrates the advantages of using polymers, which are lightweight, resistant to corrosion, and cheap to produce.

The lattice structure used in the study is the octet truss, popularized by architect Buckminster Fuller in the 1950s. The octet truss is both incredibly strong and lightweight. Moving forward, Ostertag's team will explore different lattice shapes that could provide even better reinforcement for various applications.

Other co-authors of this study include Parham Aghdasi and Ian Williams from CEE.

This research was funded by a grant to the Berkeley Education Alliance for Research in Singapore (BEARS) for the Singapore-Berkeley Building Efficiency and Sustainability in the Tropics Program.