Robert Kayen teaches Engineering Geology, extreme-event modeling methods, and Engineering Geomatics in the Dept. of Civil and Environmental Engineering, and for nearly three decades has also worked as a research scientist at the United States Geological Survey, Menlo Park, CA.  He serves as an Adjunct Professor in the Department of Civil and Environmental engineering at UCLA, and previously was a Visiting Professor and Visiting Scholar at Kobe University, Japan.  He earned his undergraduate training in civil engineering and geology from Tufts University in Massachusetts, and has Masters degrees in both Geology and Civil Engineering.  His doctoral work at the University of California, Berkeley started a career–long interest in the probabilistic assessment of seismic-soil liquefaction.

Kayen has authored over 350 research publications in the fields of earthquake geotechnical engineering, LIDAR, Structure-From-Motion geomatics, engineering geophysics, marine-geotechnics, and marine methane hydrate stability. He is one of the founders and a long-time steering committee member of the National Science Foundation (NSF) sponsored Geotechnical Extreme Events Reconnaissance (GEER) Association (geerassociation.org).  Dr. Kayen has received honors that include the Middlebrooks Award from ASCE, United States Department of Justice Commendation awarded by the Environmental Division, and the NASA-Ames Honor Award. In 2017, he was an SFGI-U.C. Berkeley Distinguished Lecturer.  He is the current Vice-Chairman of the Marine Engineering Geology Commission of the IAEG.  He was the editor of a multi-volume U.S. Geological Survey Professional Paper Series on ‘Earthquake Hazards of the Pacific Northwest Coastal and Marine Regions’.

Kayen has led a decade-long international research program to acquire field-shear wave velocities at most the world’s well-documents liquefaction case-histories, principally in Japan, China, Taiwan, United States, Chile, and the Mediterranean region of Europe.  These globally-derived data have been useful to synthesize and model the most comprehensive shear wave velocity-based catalog for soil-liquefaction triggering relationships.  The analytical foundation of these probabilistic models are Bayesian inference and System Reliability models. A cornerstone of his research is the use of non-invasive surface wave-dispersion to model the shear wave properties of the ground.  These methods include the multi-channel assessment of surface waves and ambient vibration methods such as spatial autocorrelation.  Collaborations with researchers at UC Berkeley, Middle Eastern Technical University, and Cal Poly have led to parallel assessment methodologies for the Cone Penetration Test and Standard Penetration Test.

Geotechnical engineering methods are validated through comparison with field-data of surface deformations and sub-surface state properties.  Recent advances in non-invasive surface imaging technology allow us to rapidly and inexpensively map spatial aspects of deformations.  Kayen is one of the pioneers in the application of LIDAR laser-technology to geosystem problems.  Recent work is expanding that focus to include photogrammetric computational imaging (Structure-From-Motion, SFM) using unmanned-aerial systems (UAS) to create ultra high-resolution three-dimensional models of surface damage. LIDAR and SFM technologies in earthquake engineering allow for the rapid capture of failure morphologies and their permanent archiving. 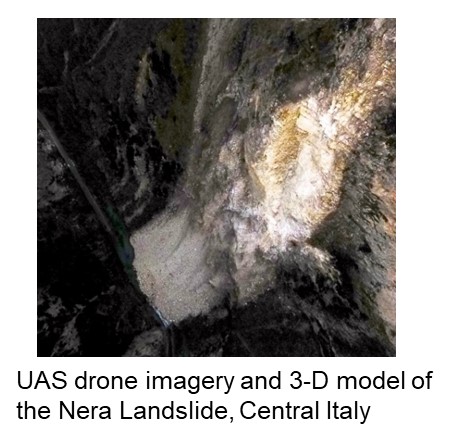